Zoom of the Festival of Lights in Lyon 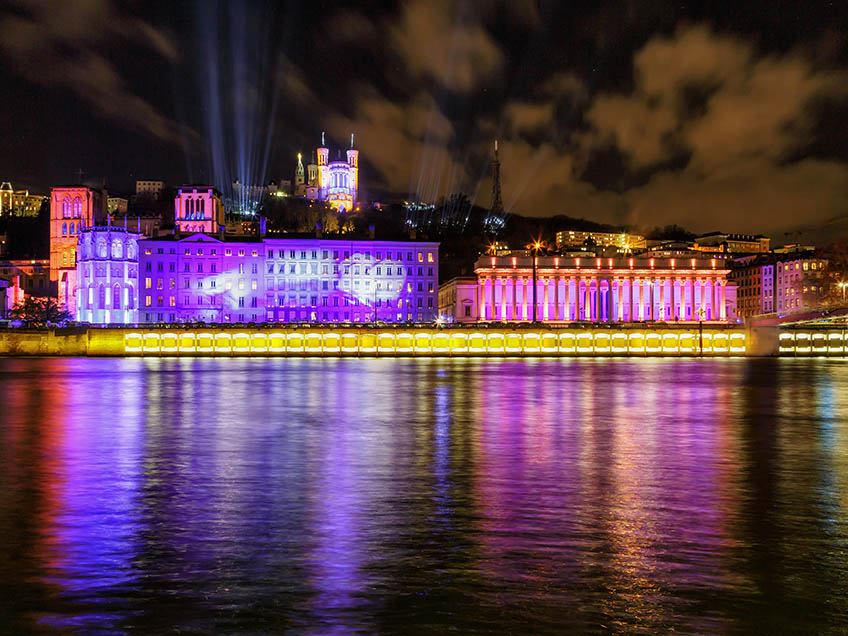 The Festival of Lights is a popular event in Lyon, France. It takes place every year on 8 December to celebrate the life and work of Saint Joseph, the patron saint of carpenters and engineers (and dads too!). The festival includes a night tour of the old town and illuminations that shine all over the city, from buildings to bridges! In 2022, it will be even more spectacular than ever, with brand new installations that will light up your heart this holiday season.

History of the Festival

A church dedicated to the Virgin Mary was built in Fourvière in 1168. It was destroyed during the wars of religion between Catholics and Protestants (1562). Restored, it welcomed the successive wishes of the inhabitants and the aldermen in the face of epidemics. On 8 September 1643, the town councillors of the time (the provost of the merchants and the aldermen), went up to Fourvière to ask the Virgin Mary to protect the town from the plague that was arriving from the south of France. They vowed to repeat this pilgrimage if Lyon was spared. This vow is still honoured on 8 September.

A Tradition that began in the 19th Century

In 1850, the religious authorities launched a competition for the creation of a statue, envisaged as a religious signal at the top of the Fourvière hill. It was the sculptor Joseph-Hugues Fabisch who produced the statue in his workshop on the quays of the Saône. The inauguration, initially planned for 8 September 1852, was postponed to 8 December because of a flood in the Saône. On the day of the inauguration, bad weather once again interfered with the celebrations: the religious authorities were about to cancel the inauguration. Finally the sky cleared... Spontaneously, the people of Lyon put candles in their windows, and at nightfall, the entire city was illuminated. The religious authorities followed the movement and the Fourvière chapel appeared in the night.

That evening, a real festival was born! Every year from then on, on 8 December, the people of Lyon place luminous lights in their windows... and walk through the streets of the city to admire the exceptional lighting installations.﻿ In 1989, the lighting of heritage sites, the landscapes of rivers and hills, districts and roads dressed up the whole city and contributed to the nocturnal environment and the beauty of the territory. Since 1999, the Festival of Lights has taken place over a period of four days.

The light of the heart

The Lyon 2022 Festival of Lights is an annual event that brings people together to discover and appreciate the beauty of visual art using light as its main medium. It will take place in Lyon, France, from Thursday 8 to Saturday 10 December from 8pm to midnight and from 6pm to 10pm on Sunday 11 December.

Night tour of the old town

This walk will take you through the old town, with its narrow streets and beautiful buildings. You will have the chance to see the historic Place Bellecour, where you can admire the famous statue of Louis XIV on horseback. The tour will then take you to one of Lyon's churches, St. John's Cathedral, where you can admire many works by one of Lyon's great artists, Marc Chagall. The visit is free and lasts about 2 hours.

The 'Fête des lumières', a popular event in Lyon

The 'Fête des lumières', an event organised every year in Lyon and considered one of the most popular cultural events in France. The festival is organised by the City of Lyon and the Greater Lyon Movement. It consists of more than 40 light shows across the city - including projections on buildings and monuments - as well as concerts, street performers, food stalls and much more.

The 2022 Fête des lumières will be out of this world!

The Fête des lumières, a popular event in Lyon. The lights have gone out and the crowds have dispersed, but not before leaving you with a lasting impression of one of the most spectacular light installations in Europe, if not the world. If you couldn't make it this time, don't worry, there are more light events to come!